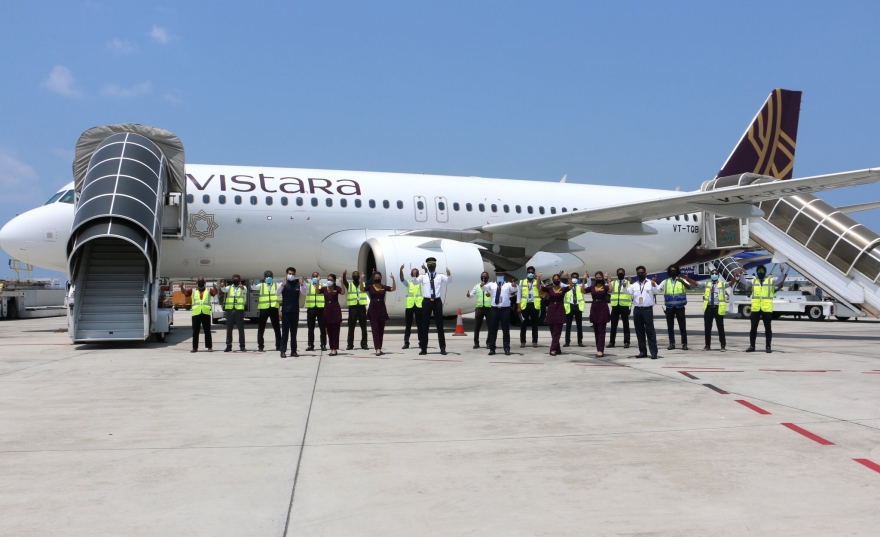 India’s finest full-service carrier Vistara Airline inaugurated its scheduled flights from Mumbai, India to Velana International Airport (VIA), Maldives, on March 4. The inaugural flight, Vistara Airbus A320neo aircraft landed at VIA at 12:25hours with 164 passengers. The flight was welcomed by a water salute organized by the Fire and Rescue Services of Maldives Airports Company Limited (MACL). The airline will fly three times a week on the route under India’s transport bubble agreement to VIA.

Vistara Airline is a joint venture of Tata group and Singapore Airlines. Vistara Airline is India’s highest- rated airline on Skytrax and Tripadvisor, and has also been the winner of several ‘Best Airline’ awards.

As Vistara Airline starts its non-stop flights to VIA, it is the fourth Airline that operates direct from different parts of India.

MACL warmly welcomes Vistara as its newest partner and believes that the airline will add value to VIA and to Maldives. During the COVID-19 pandemic VIA has kept its high standard measures assuring passenger and staff safety. As a result, on September 2020 VIA was awarded the ACI Health Accreditation certificate as the 2nd Airport from Asia Pacific and on January 2021 VIA received the ACI Voice of the customer recognition award.

The company further reveals its new aim of becoming one of the first airports in the world to fully vaccinate all its airport workers and staff.