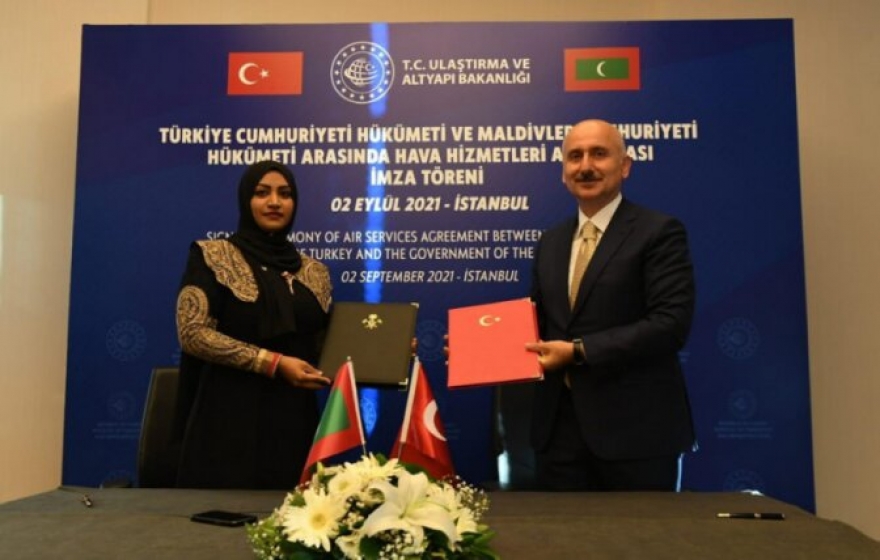 An Air Services Agreement has been signed between the government of Maldives and Turkey.

Minister Karaismailoğlu said, “Although Turkey and Maldives are geographically far from each other, they are two countries that have close relations both at the bilateral level and on international platforms. In today's meeting, we thoroughly evaluated our relations with my esteemed colleague, especially in the fields of civil aviation and maritime transport. We exchanged ideas about what we can do to further our relations in these areas. In the field of maritime, we evaluated the concrete steps we can take together, especially cooperation opportunities in maritime safety and shipbuilding.”

Stating that the relations with international organizations were also discussed, Karaismailoğlu stated that an Air Services Agreement was signed with the Maldives.

Karaismailoğlu said, “With this agreement, we have strongly determined the legal infrastructure of our relations in the field of civil aviation. The agreement regulates many issues related to civil aviation between the two countries, such as traffic rights, flight capacity, flight safety and fare schedules.”

Saying that the agreement will also contribute to the further development of cooperation in economic, cultural and tourism fields, Minister of Transport Karaismailoğlu invited his counterpart Nahula to the 6th Transport and Communications Council to be held between 8-12 October.