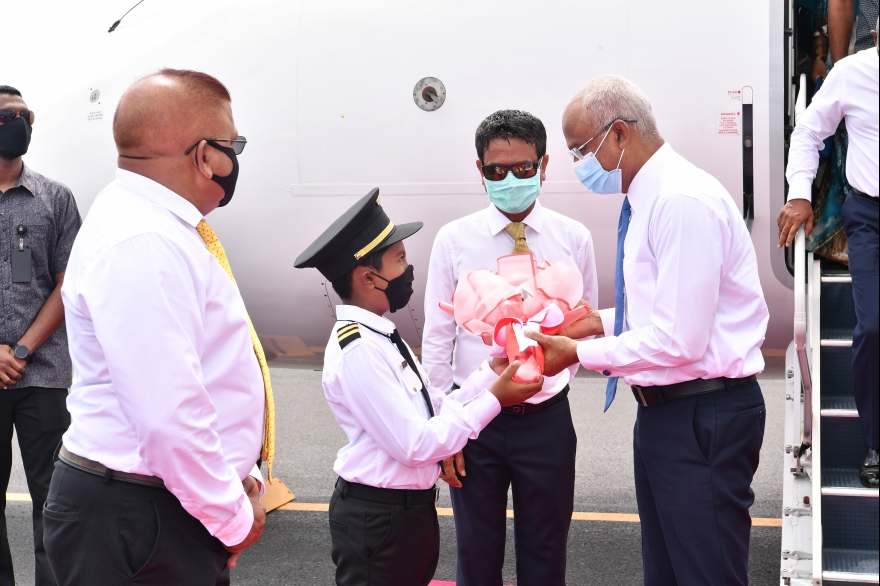 Hoarafushi Airport, the first airport to be developed in Haa Alifu Atoll, is expected to ease travel for residents of the region.

H. E. President Ibrahim Mohamed Solih officially inaugurated Hoarafushi Airport, at a ceremony held on November 19, 2020, in Hoarafushi Island in Haa Alifu Atoll. He was accompanied on his visit to the island by Cabinet Ministers, Members of Parliament, and senior officials of government offices and institutions.

In his speech, President Solih highlighted that the establishment of an airport in the area has been a longstanding aspiration of the residents of the region, and that its completion marks an important milestone in this Administration’s efforts towards decentralization. He further noted that the new airport would play a vital role in the development and connectivity of Thuraakunu, Uligamu, Molhadhoo, Ihavandhoo, Thakandhoo and Maarandhoo islands.

During his remarks, President Solih expressed gratitude towards MTCC for completing the airport development project in a short period of time despite the ongoing pandemic. He also highlighted the efforts of the Ministry of Transport and Civil Aviation and the Ministry of National Planning, Housing and Infrastructure for their involvement in the project. Continuing, the President said his administration plans to develop an airport in close proximity to every inhabited island, complemented with a comprehensive ferry network between them. He said this would allow for better movement of persons and goods and services. Highlighting on further developmental plans, the President went on to announce the development of Hanimaadhoo Airport – allowing for direct international flights – and the airport in Addu City.

The ceremony held to officially open the airport was attended by the President, Parliamentarian for along with senior government officials, parliamentarians, and officials from MTCC.

The airport development project was contracted to Maldives Transport and Contracting Company, MTCC in March 2019. After its completion National flag carrier, Maldivian, successfully conducted a test flight to the new airport on November 16, 2020 and began scheduled flight operations on November 26, 2020.

The scope of the project contracted to MTCC included the construction of a 1,200-metre runway, 8,635 square metres of apron and taxiway, service roads in front of the terminal, a 9,473-square-metre parking area, a 1,718-square-metre fire access road, a fire building, a passenger terminal, airport security and a beach fence area. The overall cost of the project is approximately 212 Million Rufiyaa.