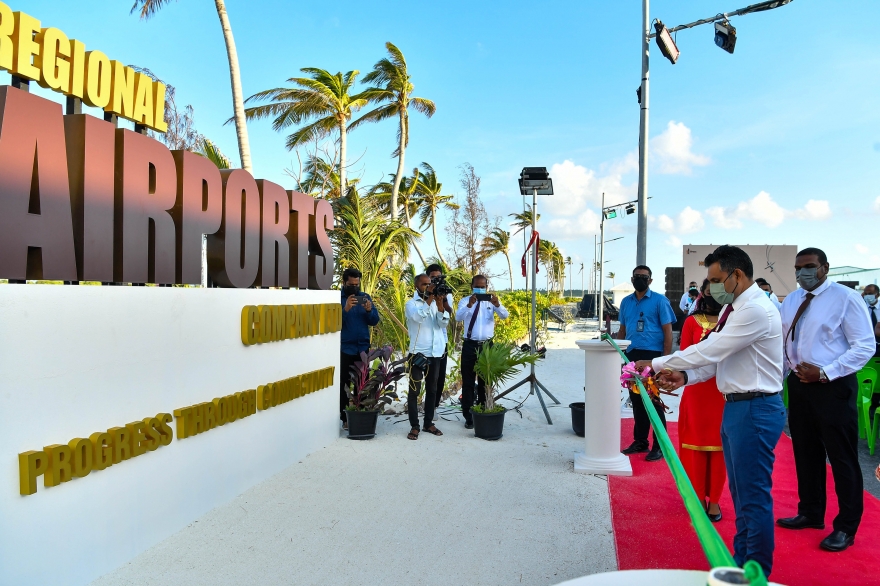 Hoarafushi Airport celebrates one year to the beginning of an enduring success story. The 1st anniversary celebration of Hoarafushi Airport took off on Friday, November 19, 2021, with the Regional Airports Company team.

The construction of Hoarafushi Airport began on April 19, 2019 and a little over a year later was opened for commercial use on November 19, 2020. Only a year later, Hoarafushi Airport is the first regional airport to be fully certified under RACL management. Within the year, staff were fully recruited to the airport and long-term development plans have been set into place. There are several development projects that will further enhance the airport’s footprint and capacity such as the biggest “fire pit” in the Maldives for fire training.

Staged at the grounds of the Hoarafushi Airport, on the occasion of the anniversary celebration there was a free, family-friendly event which featured live music, and fun activities. The day started with the hoisting of the company flag at the airport by the COO, Ahmed Ibrahim. Next, there was a grand escort prepared for the chief guest, Vice President of Maldives, Faisal Naseem. After the Friday prayers the event continued with a special lunch (Jaafaiy) prepared for all the invitees of the event, with varieties of Maldivian traditional cuisine. The official ceremony began at 4pm with the revealing of the RACL monument which was done by the Vice President, Honorable Faisal Naseem.

Thereafter, a special speech was prepared by the Managing Director of the company and Transport Minister, Aishath Nahula followed by Parliament Member Ahmed Saleem’s speech. The ceremony was concluded with a speech by the Vice President, Faisal Naseem. Afterwards there was a tree planting event to make Hoarafushi Airport greener, all the chief guests were invited to participate. After all the official ceremonies, the music event ensued with a banging performance of boduberu by Bidhabin and live music by Shalabee. All the citizens of the island were invited to participate and enjoy at this event. The celebrations carried forward to the next day with a children’s event in the evening and a friendly football match between the airport staff and a team compiled of the youth workforce in the island of Hoarafushi.

“Hoarafushi Airport embodies the current administrations visions of a decentralized Maldives” said the managing director, Mohamed Rizvi, of Regional Airports Company. It is improbable to say that the construction of the airport plays a huge part in bringing tourism into Hoarafushi. The potential of development is apparent in the island of Hoarafushi and it is indeed worth to mention that Regional Airports Company Limited has a huge role to play in being the catalyst for this naturally beautiful island to flourish economically.