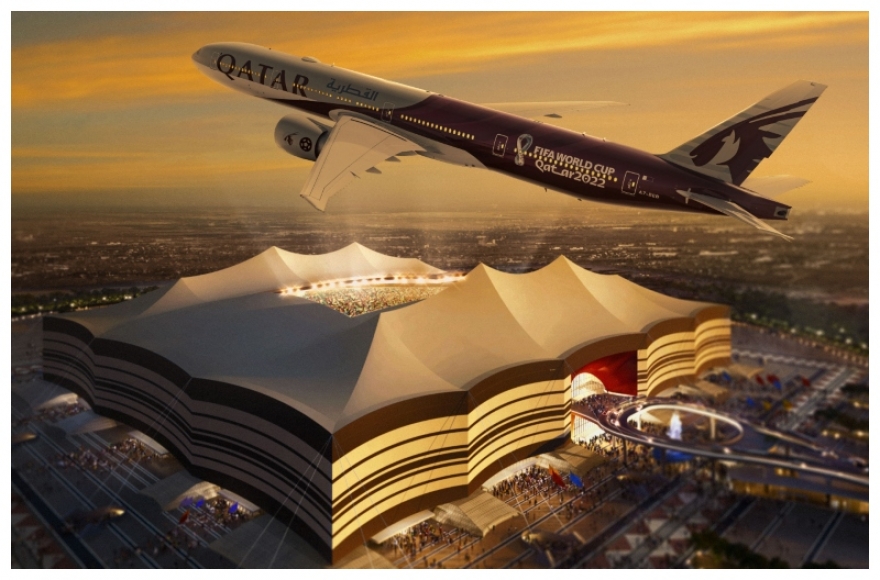 The eyes of the world will be on Qatar for the Final Draw of the 22nd edition of the FIFA World Cup Qatar 2022™ on Friday 1 April, to witness the grouping of all teams for the flagship competition.

The much-anticipated ceremony will be held at The Doha Exhibition and Convention Centre, starting at 19:00 (Doha time). The Final Draw will be graced by a delegation of Qatar Airways’ senior management who will be present to share the excitement amongst several former champions of the prestigious tournament in attendance.

Qatar Airways Group Chief Executive, His Excellency Mr. Akbar Al Baker, said: “What was once a dream is now a reality. Many world-class footballers will be present to play their part in deciding who will face who in this year’s FIFA World Cup™ in Qatar.”

H.E. Mr. Al Baker added: “As the Official Airline Partner of FIFA, we offer fans from around the world unique travel packages, inclusive of match tickets, flights and accommodation options, guaranteeing an unforgettable experience from start to finish. We want to utilise our global network to reunite the world in Qatar for what will truly be a once-in-a-lifetime sporting event.”

With 29 out of the 32 participants confirmed at the time of the Final Draw, qualified teams will be separated into four pots based on the latest FIFA Men’s World Ranking. Pot four will include three placeholders representing the two intercontinental play-off winners and the European play-off winner, who will only be determined in June.

Guests attending the Final Draw event will be able to experience the World’s Best Airline’s multi-award-winning Qsuite Business Class, which will be featured in a designated area.

Qatar Airways is inviting football fans to experience the first FIFA World Cup™ in the Middle East, with a range of all-inclusive travel packages starting from USD $3,400 per person*. With just a few easy steps to follow, fans across the world can book their complete travel packages with flexible booking options for the mega event. To guarantee their experience, fans can choose from seven-tiered travel packages which include return flights, match tickets and accommodation options. Customers can secure their spot now and follow their favourite team at qatarairways.com/FIFA2022.

As of now, 15 teams including the host nation, Qatar, have already qualified for the tournament including: Argentina, Belgium, Brazil, Croatia, Denmark, England, France, Germany, Iran, Netherlands, Serbia, South Korea, Spain and Switzerland. Fans are encouraged to begin preparing for their journey, with less than eight months until the mega-event, in what promises to be an experience of a lifetime.

The tournament will be held across eight world-class stadiums which are designed to inspire the various symbols of Arabian culture. The Al Bayt Stadium will host the opening game with a capacity of 60,000 seats, while Lusail Stadium is set to host the final match of the tournament, with a capacity of 80,000 seats. The remaining stadiums will house 40,000 spectators. These include: Ahmad Bin Ali Stadium, Al Janoub Stadium, Khalifa International Stadium, Education City Stadium, Stadium 974 and Al Thumama Stadium.

As FIFA’s Official Airline Partner since 2017, Qatar Airways has sponsored mega events including the 2019 and 2020 editions of the FIFA Club World Cup™, and the FIFA Arab Cup™, all of which were hosted in Qatar. The airline is also eagerly anticipating the upcoming FIFA World Cup Qatar 2022™ - the first in the Middle East, and offering a seamless journey from almost 150 destinations across the globe to fans attending this world-class event.

In its goal to bring communities together through sport, the World’s Best Airline has an extensive global sports partnership portfolio that includes football-governing bodies such as FIFA, CONCACAF and CONMEBOL. The airline also sponsors some of the world’s biggest football clubs including Al Sadd SC, Boca Juniors, FC Bayern München, K.A.S. Eupen and Paris Saint-Germain.