The RIU Hotels & Resorts chain has just opened two hotels in the Maldives. Riu Atoll and Riu Palace Maldives are 4- and 5-star hotels respectively and they are located on Dhaalu Atoll. Both hotels offer guests suites over the magnificent Indian Ocean.

Luis Riu, CEO of the company, explains that "This is a great moment for the chain, because we have been working towards opening a hotel in the Maldives for over seven years. To open two hotels at the same time, having overcome an exciting technical and logistical challenge due to their geographic location is, for me, a dream come true on both a personal and a professional level."

In this project, the company left nothing to chance. The process entailed hard work which began in early 2017 and it has taken more than two years to create these two all-inclusive resorts. The two hotels, on two separate islands, are linked by an impressive 800-metre walkway over the water. The 72 suites over the water of the Riu Palace Maldives are located both sides of this walkway.

Riu Atoll is on the private island of Maafushi. This 4-star Riu Classic hotel has 264 rooms, 36 of which are over the water. The hotel has a main restaurant, the "Dhoni"; an Italian restaurant, "Sophia" and a steak house, "Beef Steak House". It also has a 24-hour Sports Bar, the salon bar "Bodeberu" and the swim-up bar "Tequila". In addition, Riu Atoll offers a pool, a childrens play area and the RiuLand kids club. 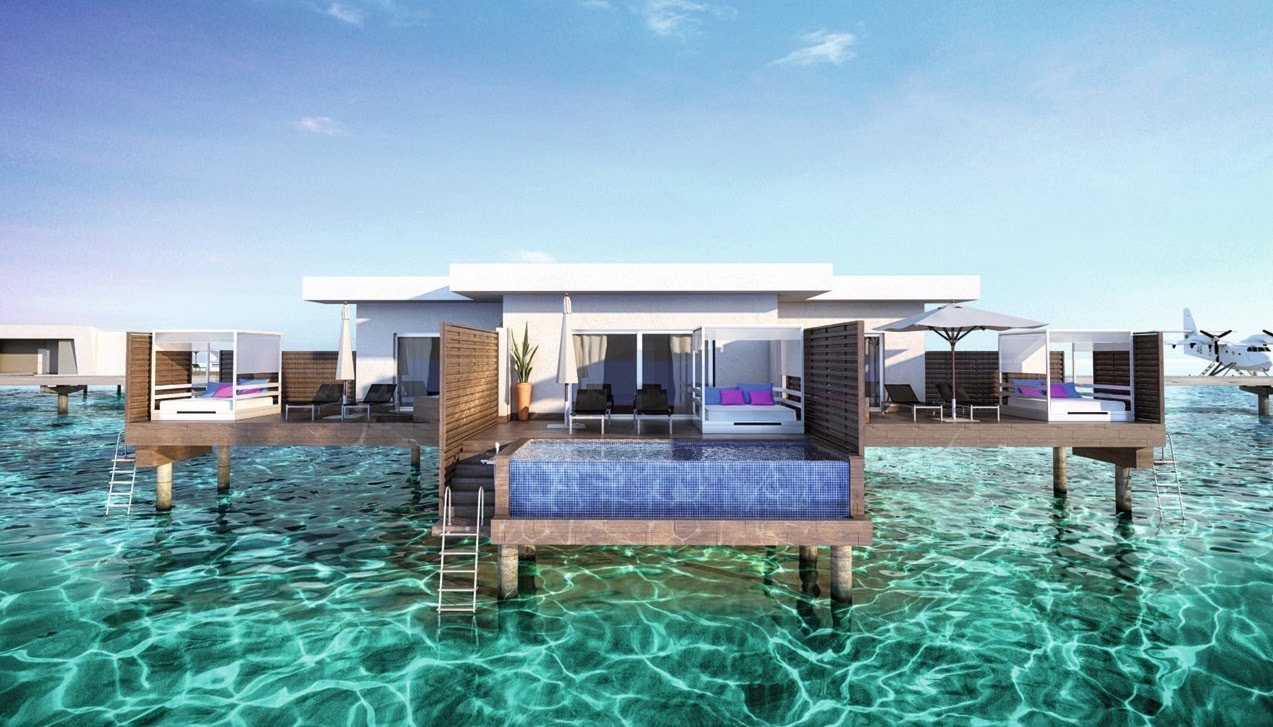 Riu Palace Maldives is on the neighbouring island Kedhigandu, which is also private. This 5-star resort has 176 rooms. In terms of cuisine, guests at Riu Palace Maldives can enjoy the bars and restaurants at Riu Atoll and, in addition, they have exclusive access to the main restaurant "Palm", which has a terrace, the fusion restaurant "Krystal" and the Japanese restaurant "Yu Hi". It also offers guests the "Paradise" bar located in an infinity pool and a chill-out zone. This resort offers premium drinks throughout the hotel and room service.

The hotels internal décor respects the surroundings in which they are located, opting for warm materials like wood and adding some glass elements to give a sense of space and to make the most of this destinations light and weather. They also include a multitude of open spaces that really showcase the spectacular views you get from anywhere on the island. The suites and rooms are characterised by light hues of sand and aquamarine that evoke the sea, but also the unique sunrises and sunsets that can be seen in this remote and incredible holiday destination.

The complex has a jetty, a wellness centre offering various beauty treatments, as well as a free gym and steam room. The excellent location on two deserted paradise islands offers guests long, dreamlike beaches where they can enjoy their holidays, as well as water activities in which they can discover the stunning sea bed around the Maldives.

There are daytime and night-time entertainment programme with live shows and music, and even the youngest ones have special areas designed for them at the Riu Atoll, such as a childrens swimming pool, a childrens club and a playground.

The international RIU chain was founded in Mallorca by the Riu family in 1953 as a small holiday firm and is still owned by the family's third generation. The company specialises in holiday resorts and over 70% of its establishments offer its acclaimed All Inclusive by RIU service. With the inauguration of its first city hotel in 2010, RIU is expanding its range of products with its own line of city hotels called Riu Plaza. RIU Hotels & Resorts now has 93 hotels in 19 countries which welcome over 4 million guests a year and provide jobs for a total of 29,985 employees. RIU is currently the world's 35th ranked chain, one of the Caribbean's most popular, the third largest in Spain in terms of revenue and the fourth largest in number of rooms.